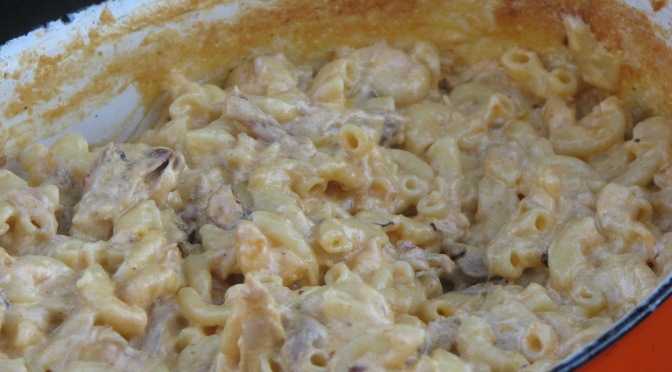 Like many kids from my generation, I grew up on Kraft Dinner.  And yes – I’ll even admit that I liked it a lot back in the day.  I like to think my tastes have matured since then.  I wouldn’t dream of eating that crap now.  Forgive me if I sound like a snob, I don’t mean to be, but I’m a bit more particular about what I’ll put in my body nowadays, and while I may not always eat the healthiest food (I really do think bacon goes with everything!) I do try and limit food with fake or overly processed ingredients, and powdery cheese definitely qualifies as fake food to me.

So what is one to do when a craving for mac and cheese takes hold?  I suggest whipping it up from scratch.  It’s doesn’t have to be as hard as one might think.  If you have an hour and an oven (or in this case, a Big Green Egg) then you can do it too.

Here’s what you need:

Here’s what you do:

It’s easier than you think… No – you don’t have to boil your macaroni first, you just dump everything – Yes, EVERYTHING – into a dutch over or heavy duty roaster, stir it up good and then bake it, covered, in your oven or on your big green egg (with plate setter) at 350F for about an hour, stirring occaisionally until the pasta sucks up most of the liquid and you’re left with a gooey, cheesey, delicious macaroni!  You can even do this in your slow cooker set on high as well, it’ll take a bit longer though.  You could optionally make a bread crumb crust to put on top and toss it under the broiler at the end, but I really don’t even think it needs that, so I never do it.

Feel free to experiment or deviate from the basic recipe.  I often put bacon or diced ham in towards the end, but this time I tossed in some shredded pork since we just finished smoking a 10 pound pork butt.  I think I may have liked that even better than bacon.  Sometimes I put a few dashes of worcestershire or tobasco in too, depending on my mood. 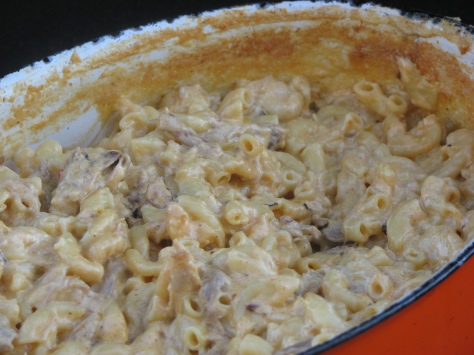