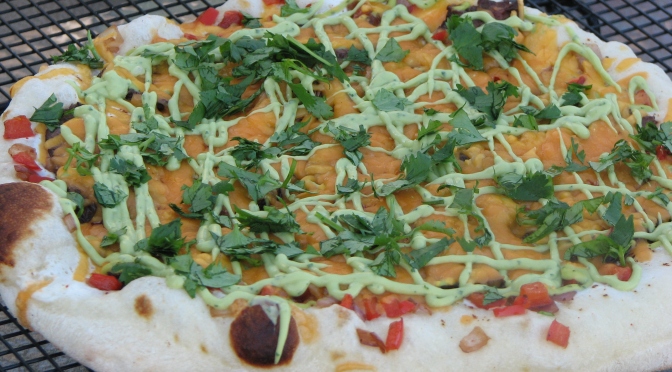 To make this pizza, you need a good steak to cut into strips.  I used a large beef tenderloin steak seared if off in my cast iron pan, then transferred to the oven to finish cooking.  I cooked it to about 140F-145F, (or the high end of medium rare).   Normally we’d cook the steak on the BGE, but Brian had already set it up for pizza making so that’s why I just did it in my cast iron pan this time.  So I put that aside and let it rest while getting everything else ready. (EDIT: This was before we had the XL and Mini Big Green Eggs).

Next, I tossed some diced onions, and bell pepper in the cast iron and cooked those until softened.  This isn’t one of those pizzas where I want the veggies to still be crisp.

Next I made my guacamole drizzle.  I used an avocado, the juice of a lime, some chopped cilantro, a few shots of Tabasco Sauce, and just a bit of water to thin it out enough that we could call it a “sauce”.  I mixed it up with my hand blender until smooth, then poured it into a squirt bottle for later.

Using  my standard pizza dough recipe, I spread sour cream as the sauce, then tossed the onion and peppers on.  I sliced up the steak into strips and laid those down, then topped with the guacamole sauce.

Next came some cheddar cheese, and into the BGE it went.  600F for about 5 minutes.  When it came out I drizzled one more layer of the guacamole sauce on top and sprinkled some fresh cilantro on it.