As we walked over to our butcher shop, we were already thinking burgers. Once we got there we were talking with our butcher Steve about doing different cheese stuffed burgers. They also sell a load of different local cheeses there but I got to thinking, I have some Danish blue cheese left in the fridge I need to use, so we just bought some ground chuck roast and buns because I had a plan formulating.

A while back we tried making a Juicy Lucy, which is when you take 2 smaller burgers and stuff them with cheese and seal up the edges. I am not sure if we even ended up posting about them because we found most of the cheese leaked out. This time I thought instead of trying to seal up 2 patties, I would make one big ball, press a hole into the middle and stuff with cheese, then I only had to seal 1 side. 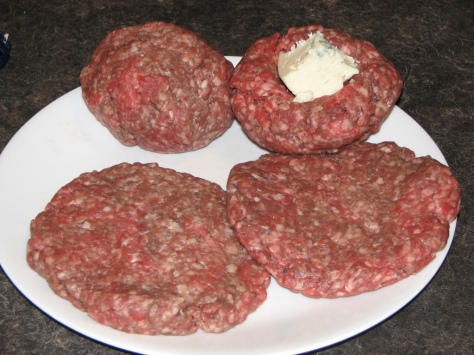 Worked like a charm. I got very little cheese leakage this time!!!

Jackie was not in the mood for blue cheese or seasoning on her burgers last night, but I hit mine with some Cluck & Squeal Beef Specific. 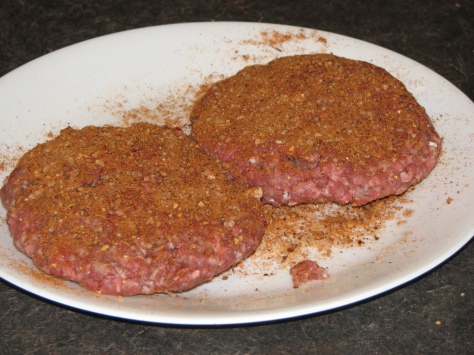 And I sliced up an onion and put a dash of olive oil and some spice rub we brought back from Hawaii on them.

I also put some bacon in the cast iron, as I was going to be making the neighbors all drool with aromas of charcoal, bacon, onion and burgers wafting through the cool evening winter air… nothing smells as good as a BBQ in the winter!!!

So the onions went on first as they need some time to caramelize without getting totally charred.

Then I took the onions off and cranked the heat a little to sear off both sides of the burgers for about 6 minutes. What I love about the BGE is that unlike gas grills, you really don’t get the same kind of flare ups because you control the oxygen. Plus using ground chuck roast from the butcher was better than using ground mystery meat from the supermarket!

After 6 minutes I took the burgers off and got set up to cook the bacon. I put the cast iron on directly and then put my raised grid on above that to finish cooking the burgers and onions higher up in the dome. I also hit the burgers with a little Worcestershire Sauce at this point. 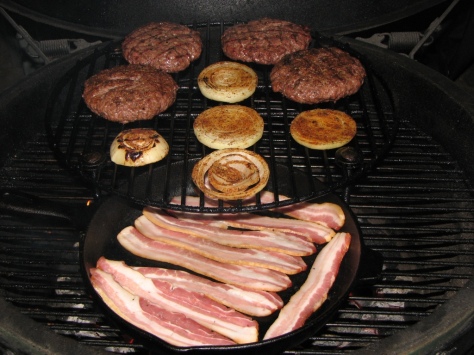 Oh man… if only you had smellivision! 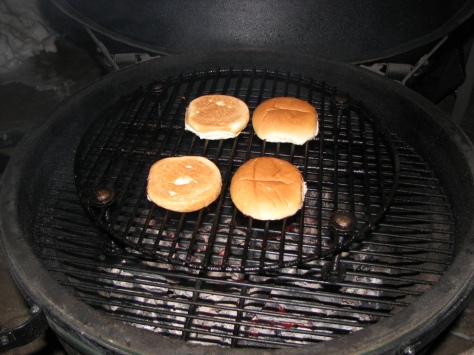 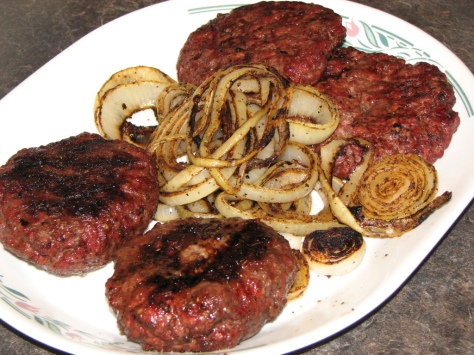 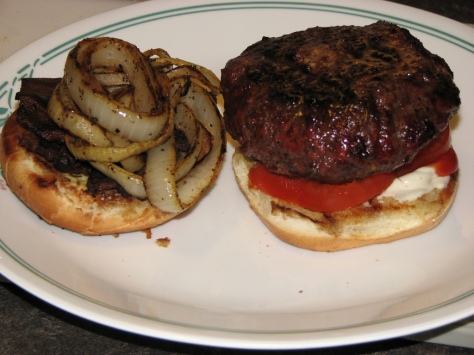 Mmmmm Mmm that IS a tasty burger!