In my family it seems turkey was only ever cooked around the big holidays, Thanksgiving, Christmas & Easter. It really is such a shame too, because turkey is awesome! With that in mind, I thought I would go back in time, into the WinnipEGGheads archives and dig out some pictures of a turkey I cooked on September 18, 2011. Why do I remember that date? Well, simply because it was my 1 week EGGiversary of getting my first Big Green Egg and to celebrate I wanted to do something big… like a turkey 🙂 Also, I’m ana… um… organized and file all my pictures by date.

I have never cooked a turkey like this since, because after that I discovered the joys of making a Spatchcock turkey, which does not involve the stuffing. However, with another turkey in my immediate future, I have decided to cook it this way again.

So let’s take a trip down memory lane and I will tell you about the first turkey I ever cooked on the Egg and what I learned from it.

I started with a fairly large bird, don’t remember the exact size, but over 16 pounds. I had read online that if you ice the breast meat it will keep the breasts from overcooking while the dark meat cooks. This is the one and only time I have done this… why? Well, yes it did work, but I find if you brine your birds (which I do now and didn’t do for this one) you don’t need to ice it. But go ahead and try it sometime if you don’t have time to brine. I think it did work.

If I recall, I iced the breasts for about an hour in the fridge while I prepped everything, then kept the ice pack on it when I pulled the bird out for the picture.

I then stuffed the bird with the garlic, lemon, apple and fresh herbs and rubbed the outside down with some olive oil and then sprinkled on some dry poultry seasoning and fresh cracked pepper.

I also used about 3-4 cups of apple wood. In hindsight it could be argued it was way too much… but that depends. See I found that the bird was excessively smokey when it come off the Egg and we had it for dinner that night. HOWEVER!!!! If you are smoking a bird to make lunch meat out of it, well hells yeah this was good! The smoke was much more tamed down the next day and the leftovers were so much better!!!

My advice… if you plan to eat the bird the night of… cut way back on the smoke… you won’t need a lot to give it that smokey goodness. I might use 1 cup of woodchips next time. But if you want to smoke it for lunch meat, then go for it. The smoke will ease up the next day.

I can’t remember what I pre-heated my Egg to, I think it was in around 375F to 400F. I set it up indirectly by using the plate setter, then the grill, then a drip pan that I put wine and chicken stock into and then I sat the bird on an inverted V rack.

I tossed the wood chips in right before I put the bird on and this thing started smoking up a storm for the first hour or so. These were the only pictures I got where I got a nice break in the smoke.

After an hour I started to baste it about every 40 minutes to an hour until the meat thermometer in the breast said 165F. 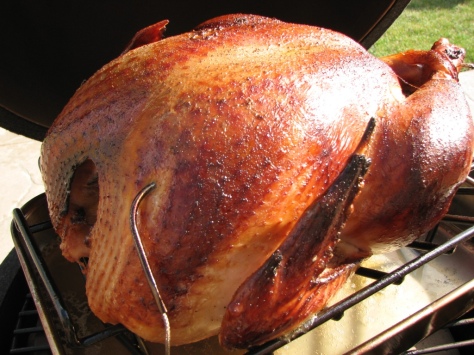 When the white meat was 165F the dark meat in the legs was well above 175F. I cooked it to temperature, not to time. Overall, I think it took about 3 hours, but I don’t recall. 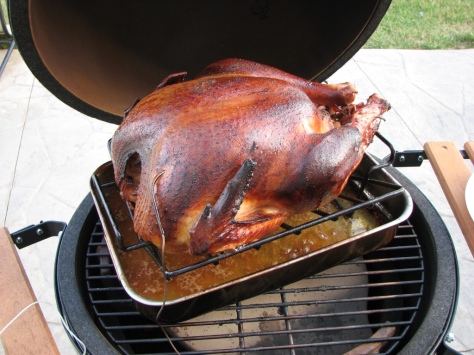 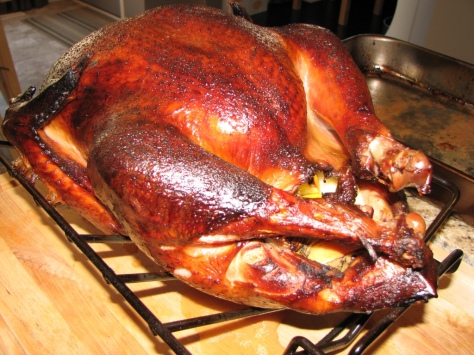 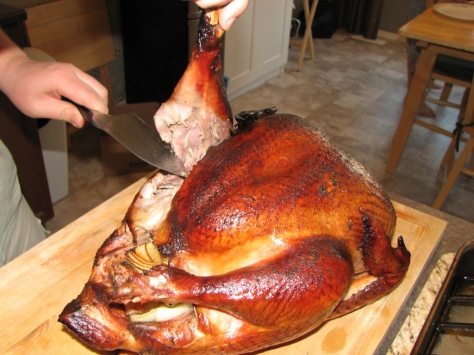 Other than this thing coming out over smoked I thought I did a killer job on it for my first attempt at cooking something big on the Big Green Egg!

What I learned was: