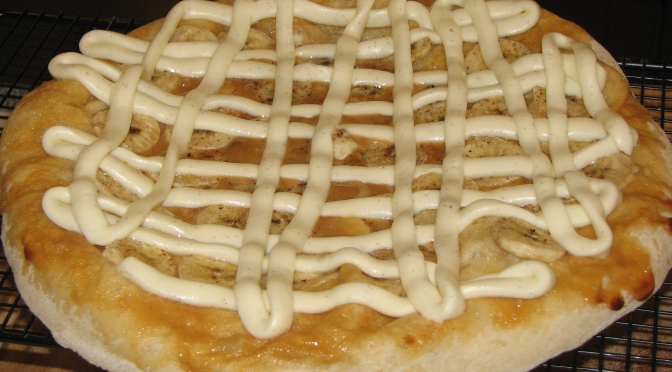 I have been avoiding posting this for a while now.  It all started back at New Years.  We were hosting a pizza party, and I was racking my brain trying to think of a dessert pizza idea that wouldn’t require me to go to the grocery store (yes, I really am that lazy).  All I had handy was a ripe old banana, some cream cheese, and a can of sweetened condensed milk.

Then I remembered a few  years back, I saw Michael Smith turn a can of sweetened condensed milk into Dulce de Leche – a delicious caramel sauce.  And caramel would go great with banana, right?

So I popped the can into a pot of boiling water, left it simmering for a couple of hours, crossing my fingers that it was really as easy as Michael said it was.  When it was finished, I popped the can open, and sure enough… delicious dulce de leche!

So, that night, I made my dessert pizza (which I so cleverly named Dulce and Banana… pun intended!) and our group went nuts for it.

It was really pretty simple to execute.

Using my standard pizza dough recipe, I spread the dolce de leche on the stretched out dough (hint, it spreads a bit easier if you warm it up first) and sliced up my ripe banana on top of it.  I sprinkled just a hint of nutmeg and cinnamon on top and I do mean the TINIEST hint… It’s easy to overdo nutmeg, so be careful.  Then you pop the pizza on the BGE, and when it’s done, let it cool on a wire rack for a bit.

Once I let it cool, I piped some cream cheese icing on top.  To find out how to make this just google “Martha Stewart cream cheese buttercream frosting” and you’ll find it.  This is roughtly the recipe I follow, except I use real vanilla bean instead of vanilla extract, and I probably reduce the icing sugar a bit, but even if you follow the recipe exactly, trust me it will be just fine.

That’s it… time to slice and serve!

So why have I avoided posting this recipe for so long?  Well we’re planning to make this at EggFest this year, and I don’t really want to give away ALL our secrets, now do I?  Having said that, what are the odds someone else at EggFest will read this and make the same thing?  Pretty slim, so I guess I should share with all of you.

A GREAT variation on this is to make a peanut butter cream cheese frosting (I think I just substituted peanut butter for the butter in Martha’s recipe and omitted the vanilla, but feel free to research your own peanut butter frosting recipe).  Brian loved this variation, but I still feel like the vanilla frosting was better.  I suppose it’s a matter of personal taste/preference.