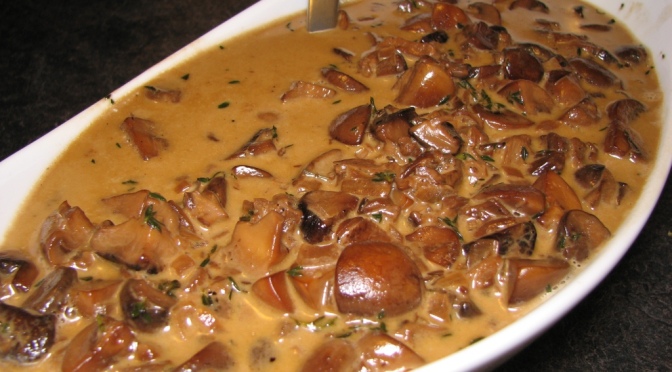 Now I didn’t cook this on the Big Green Egg but this was the main side dish and sauce that I cooked to go with the Dijon Whole Beef Tenderloin. I did the prep work for this while the tenderloin was getting happy in the marinade in the fridge. And just because I didn’t cook it on the Egg, doesn’t mean you couldn’t! I probably would have if it was summer time.

I did not come up with the recipe on my own, it came from the finecooking.com website here:
http://www.finecooking.com/recipes/porcini-cremini-mushroom-ragout-sauce.aspx

Of course I never follow a recipe exactly, so this is what I did…

I started out with about 2 and a half pounds of button, cremini & shitake mushrooms, which I browned until caramelized in butter and olive oil.

I also used 2 packs of dried porcini mushrooms (1oz) that I re-hydrated (and saved the liquid after straining it through a cheese cloth), some fresh thyme, butter, shallots, dry marsala and heavy whipping cream.

I never said this was good for you!!!

When the shrooms were nice and caramelized I added all the ingredients and let the sauce reduce until it thickened up. 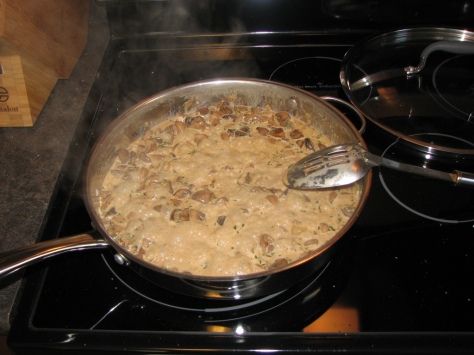 I was supposed to garnish with flat leaf parsley, but was in a rush when I did the shopping and grabbed cilantro instead!!! Ooops!!! I blame the store for keeping both herbs side by side like that 🙂

Anyway, a little green garnish would have been nice on the eyes, but they were still fantastic!!! 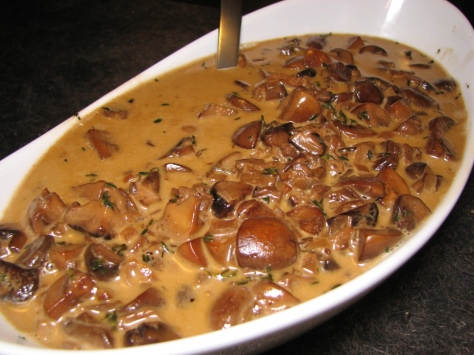